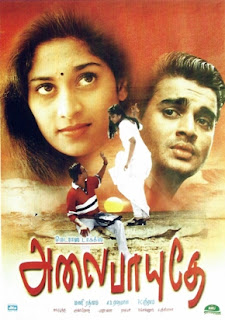 Plot: Karthik comes to the railway station to pick up his wife, Sakthi coming back from work. It is late. She is not on her regular train, but she has already left the hospital. He sits down on a bench and waits for her.

Two Years Earlier, Karthik, a fresh Computer Engineering graduate, meets Sakthi, a medical student, at a wedding. Their subsequent meetings on suburban trains gradually lead them to fall in love. Karthik's father Varadarajan, a lawyer approaches Sakthi's father Selvaraj, a railway employee with a marriage proposal. Their egos clash and the marriage is called off.  Since Sakthi is unwilling to marry Karthik without their families? consent, the two part ways.

As their separation becomes unbearable, Karthik seeks out Sakthi and they decide to get married secretly but continue to live in their respective homes until their families can be informed. Sakthi's elder sister Poorni and Karthik's friends help them get married legally. Once the marriage is completed, they return to their homes and continue to meet clandestinely.

During a marriage proposal for Poorni, the groom Raghu's father offers his second son in marriage to Sakthi. When her mother Saroja insists that Sakthi accept this offer, Sakthi reveals the truth about her marriage to Karthik. Poorni's engagement is broken and both Sakthi and Karthik are thrown out of their homes.

With the help of their friends, Karthik and Sakthi move into a half-finished flat. But as time goes by, they realize that marital path is not strewn with roses. They begin to have small tiffs for things that they used to be extremely tolerant of before marriage. At this point, Sakthi learns from her mother that her father is bedridden. She wants to go with Karthik and see him. So Karthik reluctantly accompanies her to her parents? house, only to learn that her father has died. This makes their relationship worse, with each one bearing the guilt for the turn of events.

Karthik decides to take the responsibility of fixing Poorni's stopped marriage. He arranges a meeting between Raghu and Poorni without telling them about it. The meeting misfires and he is blamed for it but gradually they start liking each other. By now, Karthik and Sakthi have not spoken to each other for sometime. He wants Poorni's marriage to get confirmed before informing Sakthi. Poorni also wants to tell Sakthi the good news herself. As she hugs Karthik, Sakthi sees them together from a distance and mistakes their physical closeness. This leads to a bigger argument between Karthik and Sakthi, which ends nastily with both of them insulting each other.

When Sakthi learns about Karthik's attempts in bringing Poorni and Raghu together, she is touched and wants to thank him immediately. Karthik, at the same time, gets a long overdue contract that is going to give his career a jump start. He rushes to the railway station to meet her coming back from work. But she is not to be seen. Where is Sakthi?
Tweet