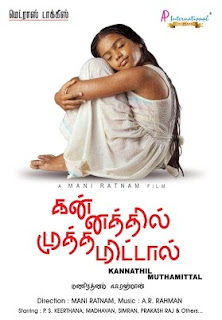 Kannathil Muthamittal is an Indian Tamil musical-drama film written, produced and directed by Mani Ratnam. It features P. S. Keerthana, Madhavan and Simran in the leading roles with Nandita Das, J. D. Chakravarthy, Prakash Raj, Delhi Kumar, Easwari Rao, Bala Singh and Pasupathy portraying other pivotal characters. The film's score and soundtrack were composed by A. R. Rahman, while Ravi K. Chandran handled the cinematography. Mani Ratnam presents the story of a child of Sri Lankan Tamil parentage adopted by Indian parents, who desires to meet her biological mother in the midst of the Sri Lankan Civil War.

Plot: Tiruselvan, an engineer and a writer of repute, is a walking testament to creativity.  He is short-tempered and does not mince words, although his family sees him as a loving husband and father. His wife, Indira, is a beautiful, excitable woman who is the only person who can blunt her husband's anger.

Their eldest daughter, Amuda, is nine years old, and the terror of the neighborhood, as well as her Tamil teacher.  Her younger brothers, Vinay and Akhil are a volatile duo attached at the hip, and always up for a round of mischief with their sister. The family lives happily, despite the occasional attempt at discipline enforcement by the parents at their children's incessant trouble-making, until Amuda finds out that she is an adopted child. 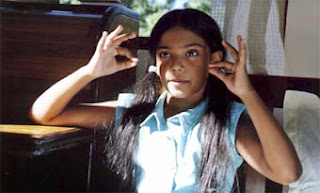 Now obsessed with finding her 'real' mother, Amuda runs away from home. Despite the entire family's attempts to support her through her anguish, she lashes out at them and withdraws from any attempts at affection, or even communication. She rejects Indira's every overture with "You are not my mother."

Tiruselvan, unable to bear his child's turmoil, promises to help her search for her mother. Their quest takes Tiru, Indra and Amuda to the war-torn areas of Sri Lanka.

Amuda's conflict and confusion; her angst and trauma form heart-rending questions she needs her mother to answer. "Why did you abandon me? Did you touch me even once after I was born?"
Tweet