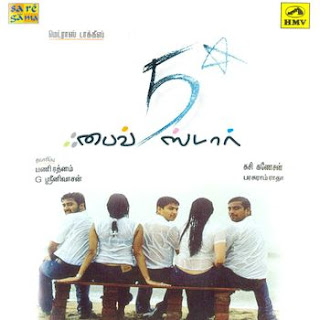 Five Star is a story about five friends, a son's rebellion against a despotic father, falling in love, and a young lady, forsaken by destiny and oppressed by social custom, who finally decides to take full charge of her life.

Five friends at an engineering college - Prabhu (serious but dashing), Ilango (conservative and timid), Sundar (the Casanova), Indira (feisty) and Priya (shy and homely) - decide that the only way to preserve their friendship is for all of them to work at the same company after they finish college.  The alternative would be to join hands and strike out on their own venture.  Through a series of machinations, they succeed in finding jobs at the same company. During their celebrations, Ilango's disciplinarian father arrives to take him away, only to forcibly marry him off to his sister?s daughter.  Ilango, who submits silently to the wedding, returns to college afterwards, where he keeps the truth from his friends.

When the rest of the gang learns that Ilango has requested a placement away from them, they are furious at his "betrayal".  However, they relent when they find out about his wedding, and promise him his space, letting him know that he is welcome to join them whenever he is ready.  As he heads home to his village at his friends? insistence, Ilango is overwhelmed by his dislike for his father, and alights from the train midway.

Six Years Later, Prabhu encounters and falls for a young lady named Easwari while traveling by train from Chennai to Mumbai.  As he daydreams in song, she gets off the train, leaving Prabhu crestfallen, with only Sundar to console him. 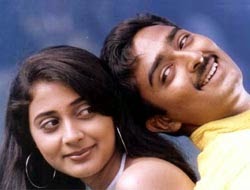 Living in a home with five bedrooms, the four friends live their own lives. Indira and Priya have both married and live with their husbands and children under one roof with Prabhu and Sundar. One room is held in place for Ilango, whenever he chooses to join them again.

Prabhu runs into Easwari again at a photography lab, and he invents multiple excuses to keep meeting her. Her response to his overtures is enigmatically stoic and withdrawn, until Prabhu finally drums up the courage to proclaim his love for her. He and his friends go to Easwari's house for coffee, and to deliver his message (through an electronic music card) to Easwari. During the course of the visit, the group is shocked to learn that Easwari is the girl whom Ilango married and deserted six years before. Since then, both Ilango's and Easwari's families have been fruitlessly looking for him. In the nervous commotion that follows, Prabhu's music card faIls down and opens loudly singing out Prabhu's feelings for Easwari, his friend Ilango's wife. 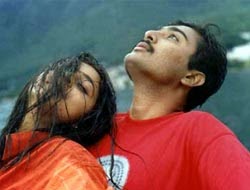 The four friends now take upon themselves one singular mission - to find Ilango and restore him to Easwari. Through alumni associations and Internet usergroups they grasp at every straw that might lead them to Ilango. But six years has been a long time and they draw blanks in many of their initial attempts. Meanwhile, Easwari endears herself to the four friends until she becomes a part of their circle.

Through an alleged 'sighting' by a college-mate, they learn that Ilango might be in a town near Geneva, Switzerland. Prabhu travels to Switzerland to track IIango down and bring him back. The tip has been genuine; after a sequence of chases and misses, Prabhu finds Ilango - only to discover that Ilango is married to a Swiss girl, and they have a son. 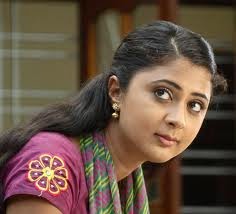 As Prabhu confronts Ilango and raps him for his cowardice and irresponsible actions, Ilango retorts by saying that it was the oppressioon that he suffered under his tyrannical father that drove him to such drastic action. Prabhu coaxes him to return to his homeland and his waiting Indian wife but Ilango is unrelenting. Prabhu returns back to India empty-handed, but decides not to reveal the truth about Ilango.

Meanwhile, Ilango's father, who has been the target of taunt and ridicule by his village, sees his failures and repents. Unable to face the world and accept his own deeds, he decides to end his life by jumping into the village well.

Even though Prabhu is silent about the truth regarding Ilango, the latter himself, in a final act of ridicule and rebellion, sends the village a photo of himself, his Swiss wife and their son. Set against the backdrop of this revelation and the father's suicide, the village gears up to get Easwari remarried to the next eligible bachelor in the family without her consent.  Tired of submitting silently to tradition and dogma, Easwari turns them back, insisting that only she will be in charge of her life.
Tweet