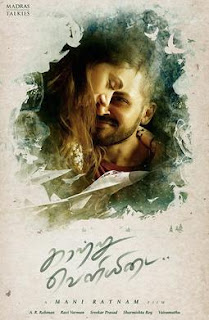 The film begins with a shot of the Kargil War showing the advances made by Indian soldiers. An Indian Air Force fighter jet is shot down by the enemy. The pilot Varun Chakrapani aka VC (Karthi) ejects from the hit aircraft and lands in enemy territory. The Pakistani Army promptly surrounds him. They imprison him in the Rawalpindi as a Prisoner of War (PoW) and subject him to torture. While being held captive, he reminisces about his romance with Leela (Aditi Rao Hydari).

Leela comes to Srinagar to work as a doctor. Meanwhile, VC has an accident while on a joy ride. He is brought in a critical condition to the hospital. With the duty doctor not available, Leela takes charge, treats VC and nurses him back to health. But, with little regard to her feelings, he gets out of the hospital without her knowledge. Dr. Illyas Hussain (RJ Balaji), an army doctor helps him with this .

When Leela comes to know about it, she and Nidhi (Rukmini Vijayakumar), her colleague confront Illyas about it. Illayas then arranges for Leela and Nidhi to come to an Airforce meeting the following week and there they meet VC. VC impresses her with his excellent dance moves at the Ball. He tells her she should meet him at the Flying Club the next Saturday at 5 pm if she likes him back. Leela accepts and VC takes her for a joy ride in his private aircraft to apologise for running away from the hospital.

VC gets to know that Leela is his course pilot's Ravi Abraham's sister, who died in a flight which VC was supposed to fly in. Both develop feelings for each other. Later, Leela doesn't meet VC for 2 months and questions Illyas about his whereabouts. He reveals that VC has orders to be in a camp at Leh Military base for 3 months. Leela and Nidhi go to meet him. When VC asks whether Leela came to meet him, she says yes. But also that she wanted to see the place where her brother Ravi died. He takes her to the spot. Slowly she realises that VC has a dark side to his personality, which is very different from what she has seen.

Back to the present, VC and two other Indians plan to escape from the Rawalpindi prison. Back to the past, Leela leaves and he tells her that she'll get couriers from him. He's true to his word. One day, the officers are discussing about their attack and she airs her opinion on the subject. VC angrily tells her that God made men and women for different purposes and she can't talk about this. But, she retaliates by saying that both genders are equal and women are not made just to manage the house and give birth to children. VC tells Leela to shut up, but she refuses. So, he orders her to do what he tells her. She gets angry and moves out.

He goes to her home and tries to make up with her by expressing his love for her. He says he's not like her. Hers is a nobler job than him as he kills and she saves lives. So, VC takes Leela to a local Registrar office and tells her that they should marry. As she is not ready for marriage, he asks her to think about it and come the next day at 4.00 pm. In a sad turn of events, he leaves for Delhi forgetting about what happened at the Registrar office. This upsets Leela very much. She feels that sometimes he treats her like a Queen whereas at other times like a doormat.

Leela reveals that she's pregnant. VC gets hesitant about it and Leela says that she'll take care of her baby by herself. The following day, Leela's grandfather dies. VC goes to her house and finds that Leela's father hates him. That night he goes and tries to convince them, but he doesn't get even a single word from them.

Before VC departs for the Kargil war, Leela tells him that she's resigning and leaving Srinagar. He pleads for one more chance and goes away to war. While fighting, he gets captured by the enemy and taken a prisoner. Somehow, VC and the two other prisoners escape and reach India.

VC starts searching for Leela. He finds her after 3 years. He tells her that he's a different person now. He says that he regrets his meeting her and loving her only to end up hurting her. VC is surprised to learn that Leela has a daughter. When he sees her daughter, Leela asks him whether she (the small girl) looks like her father or mother. VC's happiness knows no bounds. He tells his daughter that he crossed 7 seas and 7 mountains to meet her.VC asks Leela why she didn't try to contact him, to which she says that she was afraid he wouldn't like her or their daughter. They hug each other and Leela says that Rohini (VC's daughter) is his responsibility from there on.