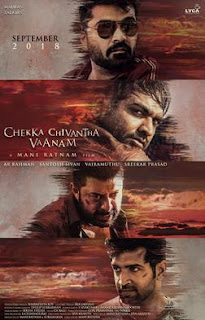 Senapathi (Prakash Raj), a God fearing boss of a crime family, is on a tour to a temple with his wife Lakshmi (Jayasudha). Despite being escorted by heavily armed men, assassins disguised as cops attempt taking down Sena and Lakshmi, but they evade the assault. His children are notified of this. Sena has a daughter (RJ Sindhu) and three sons: the eldest being Varadan (Arvind Swami), who runs a part of his empire in Chennai. The second, Thyagu (Arun Vijay), operates his business in Dubai with Arabs. The third, Ethi (Silambarasan), runs the Serbian section of Sena's empire.

Meanwhile, Varadan tries phoning his friend Rasool (Vijay Sethupathi), a police inspector, for information as to who the person behind the ambush on his father was. Rasool, who is in midst of an interrogation, fails to answer his call and gets suspended for violating rules. Soon after his arrival and meeting up with Varadan, they discuss of the attack and about the potential mastermind behind it with Chinnappa (Thiagarajan) being the most probable. Chinnappa has been a long rival of Sena's ever since both dons have ruled Chennai. Varadan kills Chinnappa's son-in-law (Appani Sarath), creating a gang war. At the same time, Sena regains health. During their meetup with Chinnappa, Sena tells him that he is aware of who the culprit is, and later lets Lakshmi know that one of their sons is behind this.

Soon after, Sena passes away, and the brothers start a fight over who will be the next king to his throne. The brothers doubt each other, and a feud begins between them after Varadan takes control of his father's empire. Further, he conspires against his brothers by harming their wives and hiring men to kill them. Ethi and Thyagu join hands to revenge against Varadan, on the condition that Thyagu will be the sole king. They try to get back to India via Nepal but are captured by Varadan's men at the airport. Ethi and Thyagu manage to escape from there and reach Chennai. They overpower Varadan by manipulating his henchman and roping Rasool to their side. They kill their uncle Chezhiyan (Siva Ananth), who is Varadan's father-in-law, and capture his girlfriend Parvathi (Aditi Rao Hydari), a TV reporter.

Fearing that his brothers may harm his family, Varadan flees from Chennai. During a shootout, Varadan's wife Chitra (Jyothika) gets killed. It is transpired that Varadan hired the assassins to kill Sena so that he could succeed in getting his father's place. Ethi and Thyagu catch Varadan with Rasool's help. In the midst of the confrontation, Thyagu shoots Varadan for framing and incarcerating his wife Renu (Aishwarya Rajesh). Ethi kills Thyagu for setting up a hitman to kill his wife Chaaya (Dayana Erappa).

In the end, Ethi tries to lure Rasool at gunpoint by offering either to bite the dust or join him. Rasool tells Ethi that Ibrahim was a small gangster and was killed before his eyes in a police encounter. His mother sent him away to his uncle's house so that he would not be like his father. Since then, he hated gangsters. Rasool was still working undercover to eliminate Sena's empire, and the rift between the brothers created a chance to bring the family down. Rasool kills Ethi and reports to his authorities that Operation Red Sky has been accomplished.
Tweet