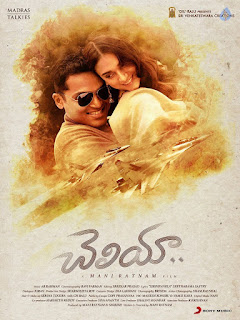 A self-centered Air force pilot falls deeply in love with a doctor, who too reciprocates to his proposal but is unable to handle the relationship owing to the intensity of their contrasting personalities.

Cheliya opens with a fight sequence between Indian army and Pakistan army where air pilot Varun (Karthi) is kidnapped by the Pakistan army. But, we are given an insight into the story as - the battle between two hearts.

Leela (Aditi Rao Hydari) is a doctor and was asked out by Varun whom she treats, immediately. The two immediately kick off in a Mani Ratnam style romantic relationship and are head -over-heels in love with each other. But at the same time, they realise that they cannot take it forward due to striking opposite personalities.

In one of the scenes, Leela makes it clear that she is looking for an "equal relationship'' which gives the viewer an idea of how Varun takes things in his own stride. What lets down Cheliya and stops it from being the film it wants to be is the narrative that the director chose to unravel the story.