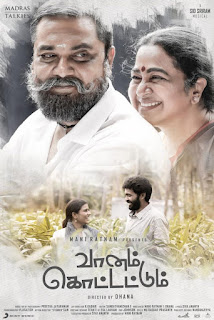 The film stars Vikram Prabhu, Aishwarya Rajesh and Madonna Sebastian in the lead roles, with Sarathkumar and Raadhika portraying supporting roles. The film is produced by Mani Ratnam for Madras Talkies, with the latter also credited for co-writing the film's script.

Vaanam Kottatum begins with an act of rage. Angered at the attempt over the life of his brother (Balaji Sakthivel), Bose Kaalai (Sarath Kumar) commits murder and ends up in prison. His wife, Chandra (Radikaa), wants her children to be away from a life of violence and relocates to Chennai. Over the years, the family begins to pick up the broken pieces. The son, Selva (Vikram Prabhu) becomes a small-time businessman. The daughter, Mangai (Aishwarya Rajesh), is studying law and also helps put with her brother's business. And 16 years later, Bose returns. Will he be welcomed into the fold? And his return also brings back a ghost from their past in the form of Baskaran (Nandaa), the revenge-hungry son of the man who Bose murdered.
Tweet