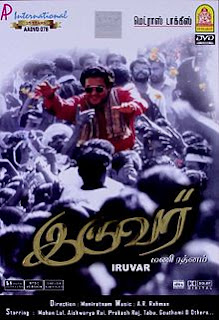 Iruvar is an Indian Tamil period political drama film co-written, produced and directed by Mani Ratnam. The film which is loosely based on the relationship between cinema and politics in Tamil Nadu, features Mohanlal in lead role along with Prakash Raj, Aishwarya Rai, Revathi, Gouthami, Tabu, Madhoo, Kaka Radhakrishnan, Rajesh, Major Sundarrajan, Delhi Ganesh, Nizhalgal Ravi and Nassar in pivotal role. The film had a very successful score and soundtrack composed by A.R. Rahman and the cinematography was by Santosh Sivan.

Plot: Iruvar is the tale of two men - Selvam, the poet and rising politician and Anandan, a budding actor. This friendship saw, with the rhetoric of the former and the popularity of the latter, the birth of an alliance which politically took the State by storm. And yet, it was the same politics that drove them apart; a separation that was politically permanent.

It was a time when the country was in the turmoil of the Independence struggle. The exuberance in the wake of independence saw the emergence of new regional political parties, the fight for democracy at the regional level and the birth of a rationalistic party for the suppressed and downtrodden, addressing itself solely at the grass-root level. Cinema yet in its infancy, was recognized as a medium to reach a wider spectrum, and utilized to propagate political consciousness and party ideologies. Thus the bond between the cinema and politics was forged. But slowly the emphasis shifted and cinema soon became a medium for the political game. 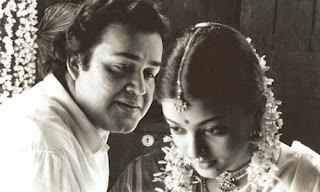 In such a scenario do Anandan and Selvam meets Anandan is to play the hero of a film of which Selvam is the writer. An instant rapport is struck, both young, full of dreams an, lofty ideals, basking in the glow of the nation's new-found freedom. Both rise in their respective fields, Anandan becoming an icon, with an image as the Messiah of the downtrodden, and Selvam a powerful orator of grand stature, following the Party's spearhead.

When Anandan decides to join politics, Selvam is encouraging, but is also the first to question his motives. Thus begin the competition and acts of one-upmanship, each wary of the other, ever watchful, though on the outside still maintaining the bonhomie; layers of love and hate mingling, making their relationship difficult to fathom. Both grow and grow apart. 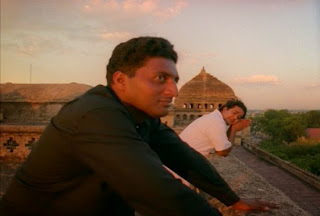 Anandan leaves the party, forms a new one and comes to power. The passing years - five decades - witnesses each one trying to out do the other; their struggle for power, the ego super-ceding their friendship and their dreams. This stark, complex intriguing, relationship continues till the end. Despite lost friendships and brotherhood, in Selvam's elegy to Anandan, despite the rhetoric, the poet?s admiration for his former comrade shines through.

Are they the same two who, with lofty ideals, a dream in their eyes, heart full of hope, marched forward to conquer the world? Those dreams and ideals; where are they?

Iruvar (The Duo) is a work of fiction relating a particular age and select events in the history of Tamil Nadu , a state in south India, and therefore has definite shades of reality. 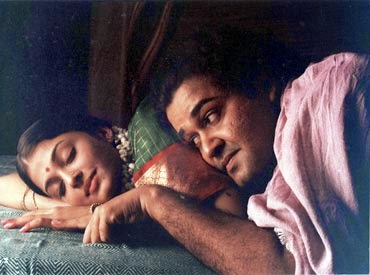 Tamil Nadu, has a uniqueness all its own. It is the rare phenomenon of cinema and politics so closely wedded to each other that, given the scenario of artistes becoming Chief Ministers and being at the helm for the last 30 years, it is difficult to perceive cinema and politics as independent entities.

The politician, recognized cinema as a rapidly growing medium in mass entertainment, and fully utilized it to help political parties bring their ideologies closer to the masses, and through the popularity of their idols, win elections and seats of power.

The actors in turn used politics as a launching pad to stardom and furthered their own cause to convert their reel image to real life. This mutual dependence exists even today. The Duo has used this unusual alliance between Cinema and Politics, as its backdrop.